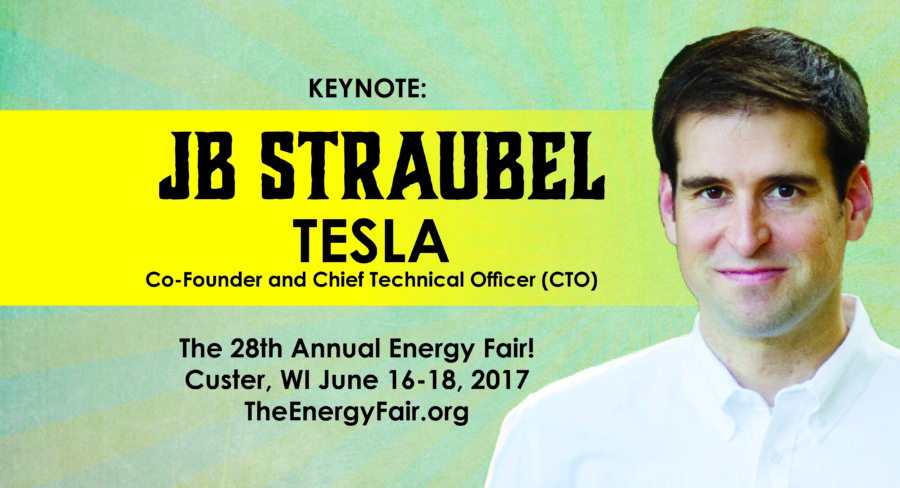 The Midwest Renewable Energy Association (MREA) officially announced that Chief Technical Officer and co-founder of Tesla JB Straubel will take to The Energy Fair’s main stage at 6:00pm on Saturday, June 17, 2017 to deliver his keynote address in celebration of The 28th Annual Energy Fair.

“Advancements in clean energy technology are a bright spot in the US economy with more people now employed in solar energy than the oil and gas industry,” said Nick Hylla, MREA’s executive director. “Tesla is a global leader in this market and is inspiring the US clean tech industry. JB Straubel is a big part of that success. One of the foremost challenges of growing this industry domestically is workforce development. Having grown up in Wisconsin, JB can be an inspiration to a new generation of innovators and engineers in our region.”

Tesla is at the forefront of electric vehicle and battery storage technology. In a time of rising concerns about the effects of climate change, Tesla is an optimistic light on the road to a clean energy future by way of innovation. Tesla first came to fame when the company put all-electric vehicle technology on the map as a truly feasible way of eliminating carbon emissions as a byproduct of transportation.

Since then, Tesla has branched out to energy storage technology to be used in tandem with solar. As Chief Technical Officer, Straubel manages the technical direction and engineering design of Tesla products like battery technology. Tesla batteries are designed to integrate with solar to harness the power of the sun and reduce consumers reliance on fossil fuels. Homeowners, businesses, and utilities are using Tesla energy products to reliably increase their use of renewable energy and foster a clean energy ecosystem. Tesla has even produced a home battery that stores excess solar energy, making off-grid living less challenging and therefore giving more people freedom from the utility grid.

Additionally, Straubel created and manages Tesla initiatives including: the Tesla Energy business, providing grid storage for commercial utilities and residential consumers; the worldwide Tesla Supercharger network of fast DC chargers; and the Tesla Gigafactory, which is leading the way toward increasing worldwide battery production and lowering the cost per kWh.

Straubel has had a lifelong interest in electric vehicles, including rebuilding an electric golf cart at the age of 14, building an electric Porsche 944 that held a world EV racing record, solar car racing, and building a hybrid trailer system that he designed while in college.  In 2008, the MIT Technology Review chose Straubel as “#1 Innovator of  35 under 35 for the year”. In 2009, DesignNews named him “Engineer of the Year”. In 2015 he was listed as #2 on Fortune’s 40 under 40 most influential business and innovation leaders. Straubel is an inventor on over 30 patents covering most areas of Tesla’s core battery, motor, and controls systems.

“Having JB Straubel speak at The Energy Fair is so exciting because Tesla has seen an unprecedented amount of interest from people across the country. People uniting to support a clean energy solution – that is what The Energy Fair is all about,” said Allison Lindquist, MREA Events Coordinator.

JB Straubel will be on hand for a Q&A session after his keynote address, and will also drive a solar powered remote control car in the Fair’s wildly competitive Green Mini Demo Derby.

The MREA’s 28th Annual Energy Fair will be held June 16-18, 2017. Featuring over 200 exhibitors and workshops related to clean energy and sustainable living, The Energy Fair is a place for the public to learn, connect, and empower each other to take action toward a sustainable future. Admission to The Energy Fair is free to MREA Members. Discounted Energy Fair Tickets go on sale April 1, at TheEnergyFair.org. NEW this year: Attend a second Energy Fair in St. Paul, MN on September 9-10, 2017, with a pre-fair Solar Professional Day on Sept. 8th. Discounted exhibit booth rates for the Wisconsin Fair end February 15th.

The Energy Fair is powered by the MREA. The MREA was incorporated as a 501(c)3 nonprofit shortly after the first Energy Fair in 1990. MREA’s mission is to promote renewable energy, energy efficiency, and sustainable living through education and demonstration. To learn more, call 715-592-6595 or visit www.TheEnergyFair.org or www.midwestrenew.org.