Why should I put PV on my house if my utility is committing to renewables anyway?

Why should I put PV on my house if my utility is committing to renewables anyway?

Utilities across the Midwest are investing in renewables. Like never before, utility investments in renewables are increasingly irrespective of state-mandated Renewable Portfolio Standards (RPS). Consider the following headline from the Des Moines Register: “MidAmerican proposes adding enough wind, solar generation to meet all of Iowa customers’ power needs.” MidAmerican Energy’s $3.9 billion investment would build more than 2,000 MW of wind and 50 MW of solar capacity.

So if you’re one of the many Iowans who live in MidAmerican Energy territory, why would you want to invest in renewable energy for your own home? The utility’s got it covered, right?

In general, there are three problems with the way most people buy electricity today. The first problem is unpredictable and uncontrollable price increases. Between 2001 and 2021 energy prices rose by 2.61% annually in the US on average. In most cases, ratepayers have little to no say in when their prices will increase, or by how much.

Second, most ratepayers have no equity in generation and are thus “renting” their power from a provider like a utility company. Utilities own the power plants and charge ratepayers for their production as well as fixed fees to use them and other infrastructure like power lines.

Third is the emissions from fossil fuels. Although most of the new sources of power being constructed in the US are renewable, the fact remains that the majority of our power still comes from non-renewable sources.

Utility investment in renewables solves only the last of those three problems. The first two remain for ratepayers. But why?

Utility investment in renewable energy is indicative of cost competitiveness of renewables compared to fossil fuels. Look at the prices for Utility-scale Solar PV and Wind compared to all the conventional forms of energy. 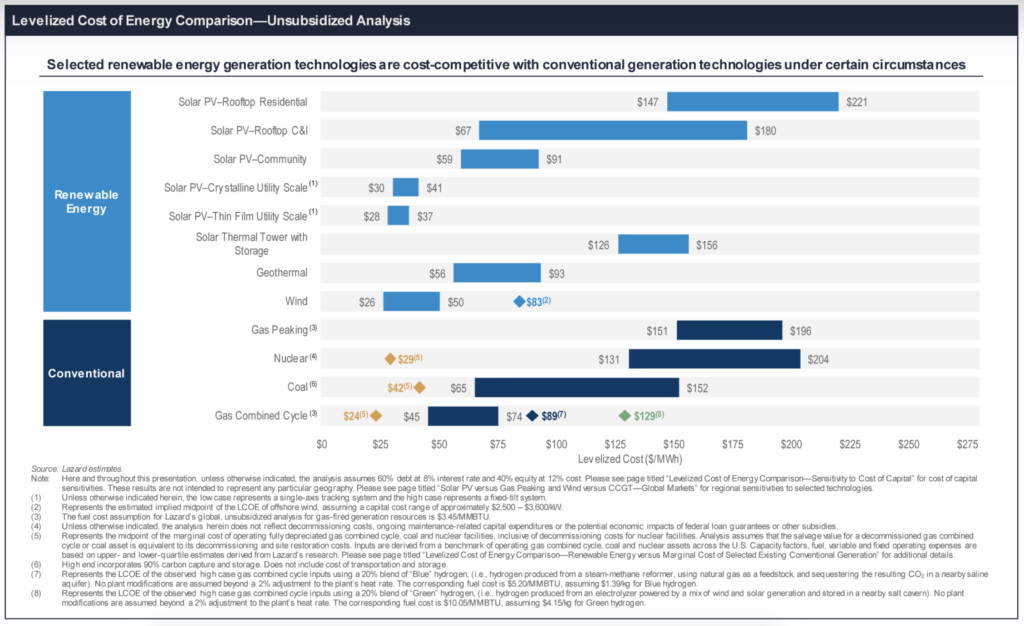 The price of this new generation capacity is lower, and yet we have no reason to believe that the prices on our energy bills will decline. One may intuit that prices paid by ratepayers roughly track the prices paid by utility companies, plus some margin. But that isn’t how electricity pricing works.

Instead, we are currently paying for past investments approved by public utility commissions (PUCs) with set rates of return and operating life. These costs have also increased over time due to requirements to meet air and water quality standards. And, these costs continue to increase because coal and nuclear assets are operating less than predicted due to wholesale market price competition from efficiency and renewables. The whole process suffers from overbuilt capacity because the utility business model incentivizes asset construction and high costs.

This process is further exacerbated by the push to build new wind and solar capacity as part of the clean energy transition. That’s on top of the already sunk costs of non-renewable generation capacity and, at this point, the new wind and solar capacity does not sufficiently replace the baseload power needs of the system. As a result, we need  development of additional transmission capacity and storage. And since we are a balkanized market with no primary policy influence, we are essentially partially investing in all assets in a way that is increasing future costs. (This makes the “stranded asset” conversation very important because one of the only ways to actually reduce future retail rates is to remove fossil fuel assets, and that involves investors absorbing the loss of continued revenue. This is not happening but instead PUCs are basically refinancing them to take advantage of lower interest rates, reducing costs on ratepayers but not eliminating them.)

The entire system is then stressed by both actual and potential decreases in electricity use per ratepayer, forcing increases in prices as costs must be recovered regardless of how much electricity is actually needed.

Since all utility types are in the wholesale market this impacts everybody. Most municipal and co-op utilities are very coal-dependent so their balance sheets are pretty challenging when it comes to future costs. Deregulated states have some opportunities to more closely pair decreased generation with decreased cost. However, the way they operate introduces a lot of risk to the consumer since they usually have short term (think 1 to 2 years) contracts which could result in major price variability based on wholesale costs and often have some proportional relationship with wholesale costs that can result in wild swings on electricity bills like they had in Texas in early 2021 after the winter storm there.

As ratepayers, we can hedge against continuously rising energy prices by buying our own generation, in the form of solar. Many homeowners (and some renters) can take advantage of the comparatively low levelized cost of energy (LCOE) provided by solar. LCOE is the cost of the power produced by the solar array over a period of time, typically ~25 years, the warranty life of the system. You can determine the LCOE of your solar system by dividing the total lifetime estimated kilowatt-hour production of your array by the total price after incentives.

If your LCOE is less than or equal to the current price for a kilowatt-hour from your utility, you already have a strong potential case for going solar and protecting yourself against rate increases. 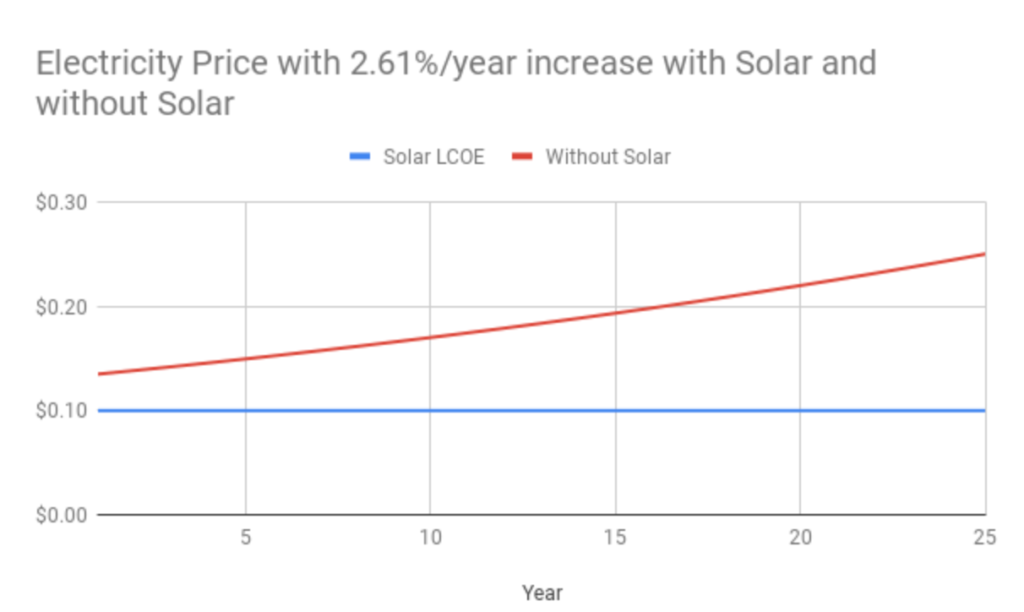 Example illustration of a $.10/kWh solar LCOE compared to 25-year cost per kilowatt-hour based on the average increase in cost over the last 20 years in the US (2.61%).

Homeowners considering solar can think of this in similar terms as the equity they build in their homes each time they make a mortgage payment. As a renter, unless your dwelling is rent-controlled, you can assume your landlord will increase the price of rent periodically. You have no control over when or by how much rent will increase. If you purchase a home with a fixed-rate mortgage, you’re taking ownership of the asset and building equity, and your payments are predictable for the entire term of the loan.

The chart above demonstrates the LCOE of solar against the rising cost of “rented” electricity, but most people’s solar arrays don’t offset their entire electricity bill for an entire year. Would-be solar owners are often limited by budget, roof space, shade, or a combination thereof. So let’s also take a look at the effect of solar on your energy bill and an example of how that translates to cumulative savings over the course of the system’s life.

Here is an example of a scenario with that 5.8 kW solar array on a home that uses 10,000 kWh of electricity per year. Because the LCOE remains even while utility costs rise, the savings from solar accumulate over the years, totaling over $17,700 in this scenario. 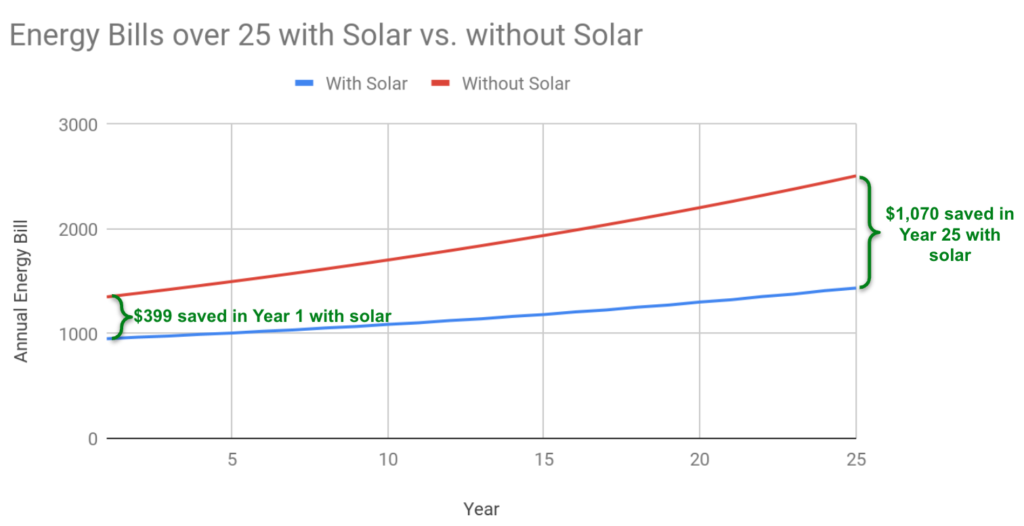 Those considering solar PV for their own home should not be discouraged from doing so by an increasing utility investment in renewables. To recap, the way most of us buy electricity right now suffers from three major problems: uncontrollable and unpredictable price increases, lack of equity in generating capacity for ratepayers, and environmental degradation. Utility investment in more large-scale renewables has the effect of decreasing greenhouse gas emissions, but solves neither of the other two problems.

We’ve now discussed the levelized cost of energy from a solar array, as well as the financial benefits of solar for a household in realistic terms. But what’s the value of solar to other stakeholders like the utilities, other ratepayers, and the grid at large? Find out in a forthcoming post about the Value of Solar.